For more information please head over to the Official Tulip Website

01. The History of Hiroshima Needles begins in the Edo Period

The production of needles in Hiroshima was started more than 300 years ago when the Asano family of local lords expanded needle production as a form of manual piecework for lower-level warriors. Since that time, the producers made improvements including better quality and higher production efficiency, eventually becoming well known as a indigenous industry.

This industry started with iron sand taken from the Chugoku mountains that was turned into steel by the Tatara steel making method. This steel was then transported on the Ota River to present-day Hiroshima City where it was made into needles. Even now, Hiroshima remains the largest needle-making region in Japan, producing more than 90% of the hand-sewing needles, marking pins, and crochet hooks in the country.

Because this needle production area has been largely dependent on exports since the pre-war period, the high value of the yen has hurt the profitability of the business. In addition, the entire industry is facing a difficult environment, with growing needle production in emergent nations and decreasing demand within Japan. Making matters worse, the number of needle producers diminishes year by year, with too few people carrying on the tradition. Before the war, this region contained 200 needle companies. Shortly after the war, this number shrunk to 45, and now the number is only 11.

Since its founding in 1948, Tulip Co., Ltd. has produced primarily hand-sewing needles, crochet hooks, and knitting needles. Our sewing sets for elementary school home economics classes are at the top of the industry, and the Tulip Brand crochet hooks have for many years been exported to more than 40 countries worldwide. In these and other ways, we have continually carried out technological innovations while operating on a base of our traditional technology.

02. How are Tulip Needles made?

A long Steel wire passes through approximately 30 processes before it becomes a needle.
Here we will provide a simple explanation of the processes. 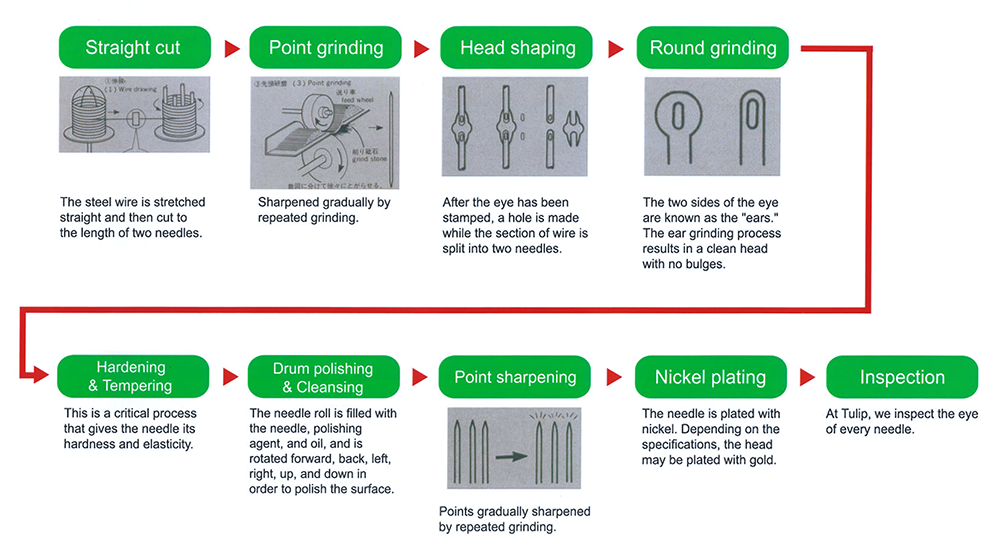 03. How are Tulip Needles different? Head

For Japanese sewing and western sewing, including quilting, because the needle is used for a long time, customers have requested needles which do not tire the hands and are resistant to breaking and bending. Based on these many customer requests, Tulip further refined its earlier technologies and conducted repeated research and prototyping over a period of three years. The result was our “Royal-type needle.” To explain why Tulip needles are so easy to use and why they are different from other needles, here we will briefly introduce our top-grade technologies. We will separately compare three parts of the needle: the eye, body, and point.

04. How are Tulip Needles different? Body 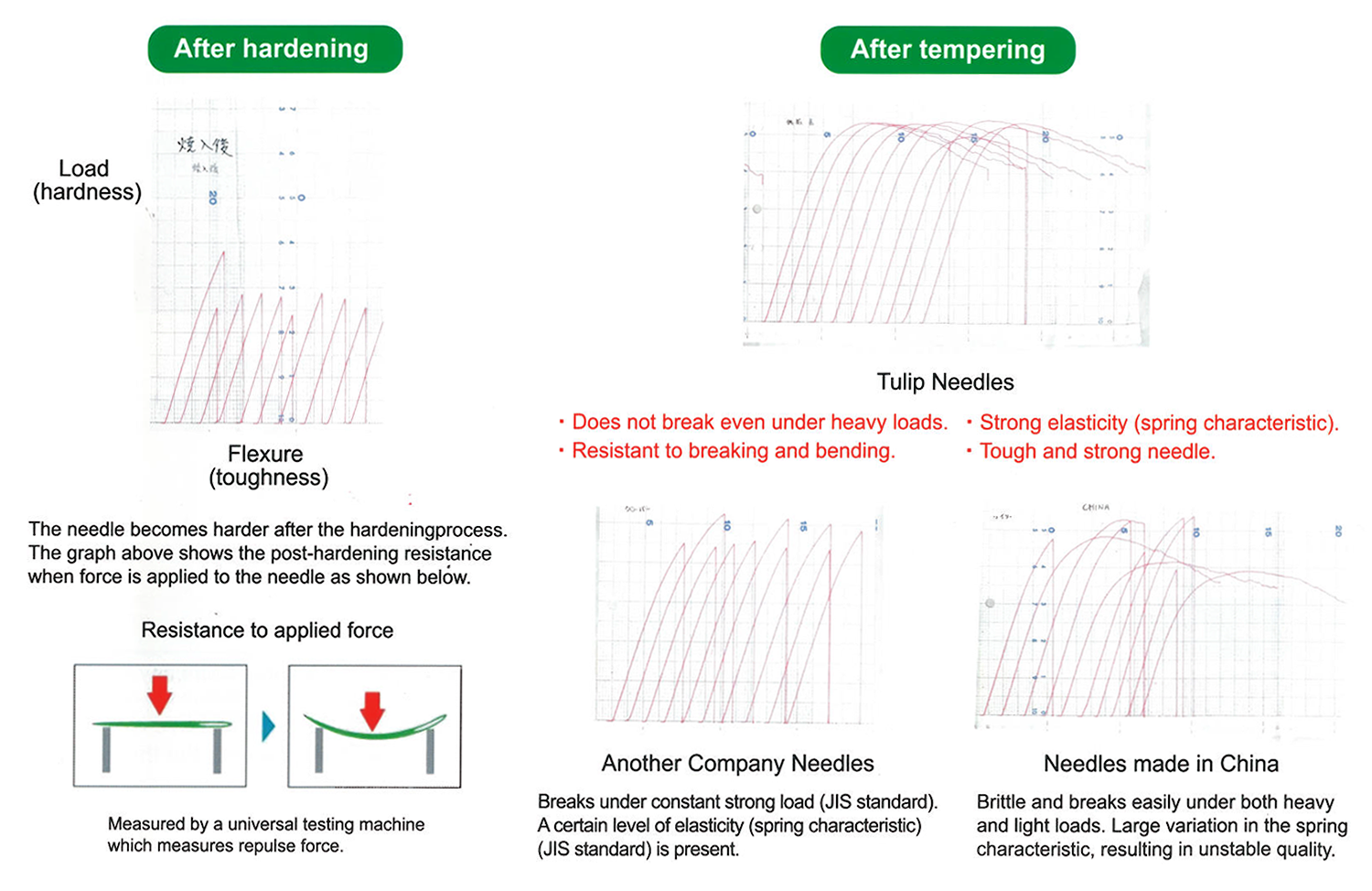 05. How are Tulip Needles different? Needle Point No.1 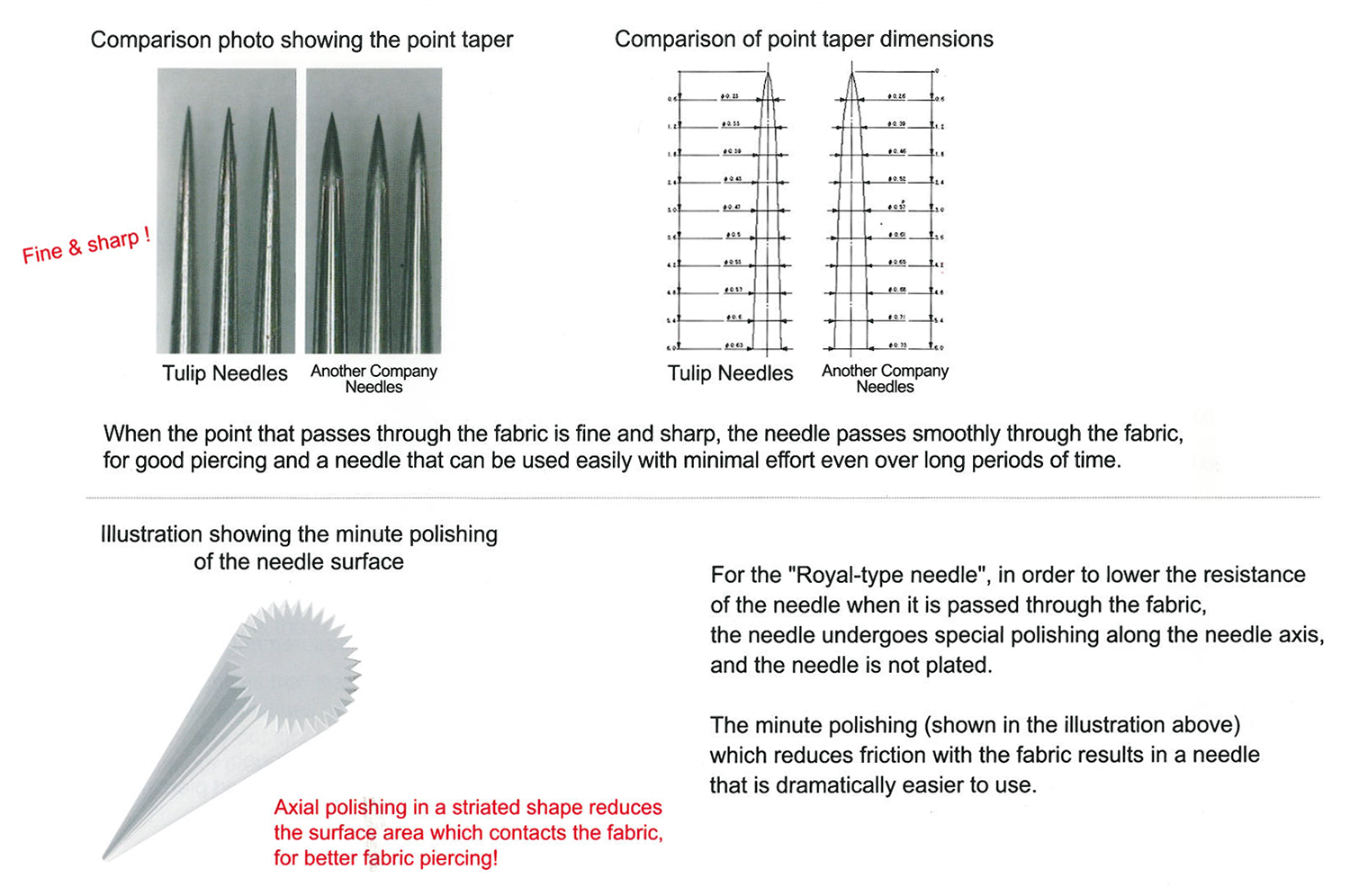 06. How are Tulip Needles different? Needle Point No.2 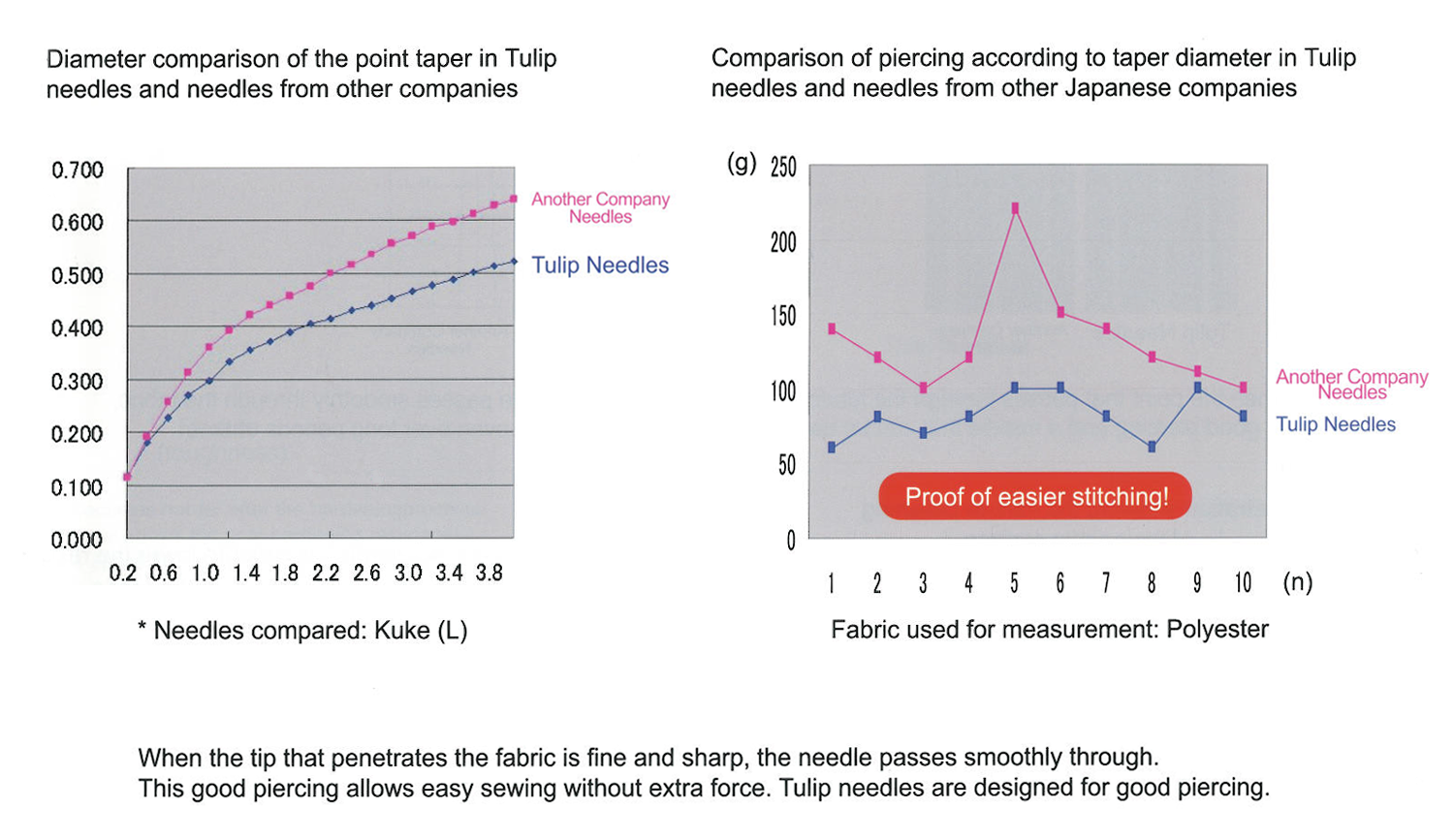 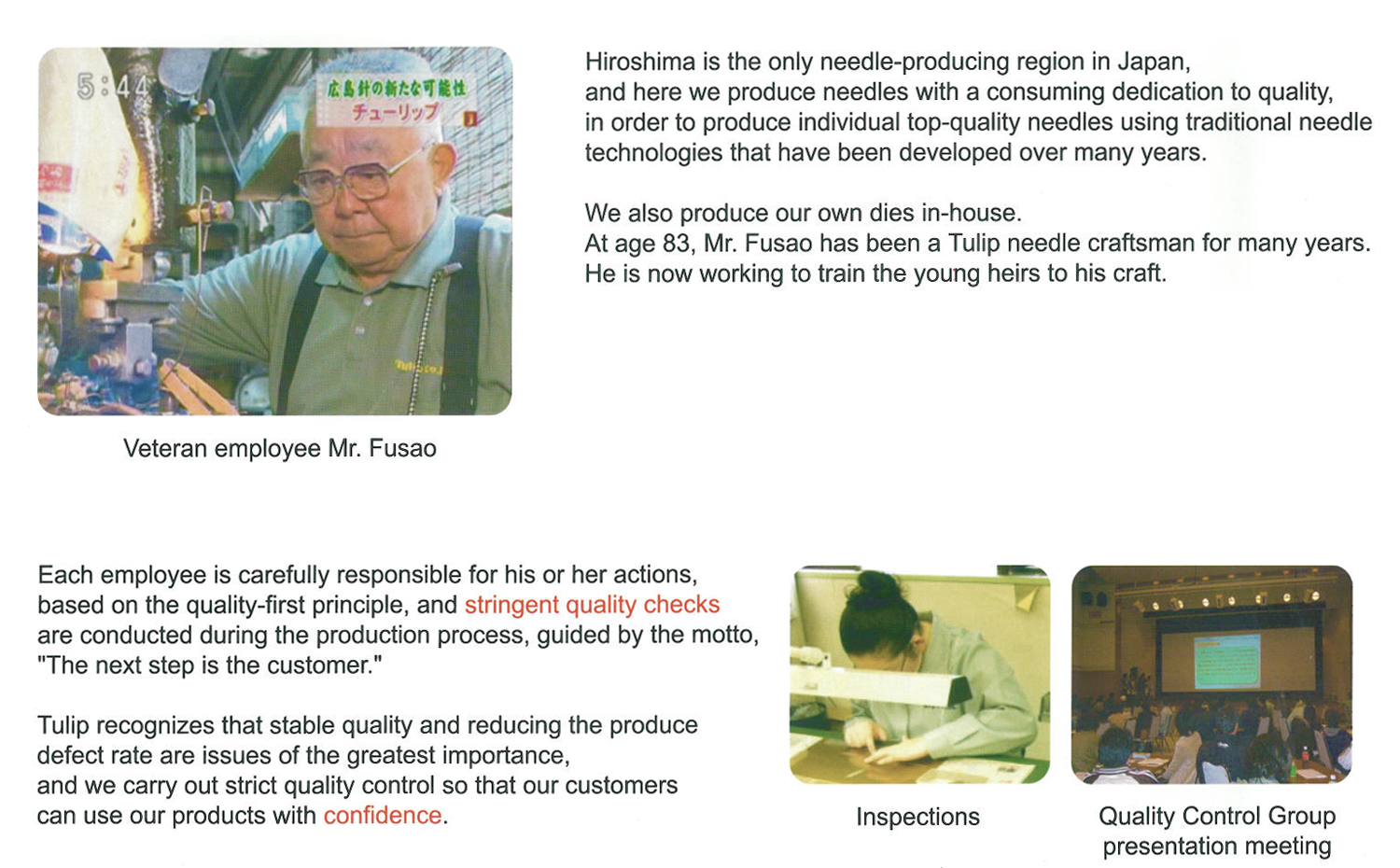 08. A single needle moved us 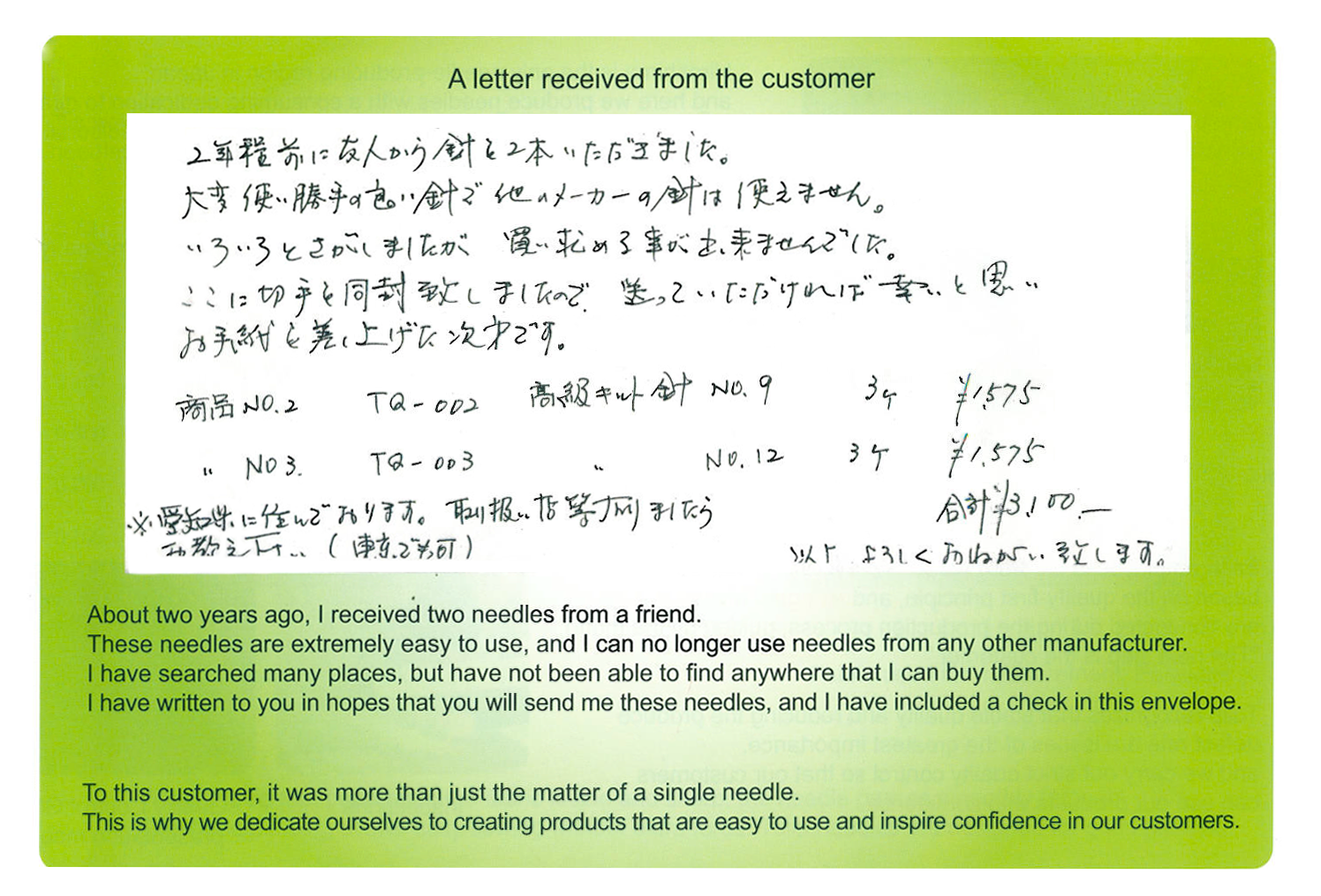 09. Did you use Tulip Needles back in elementary school? 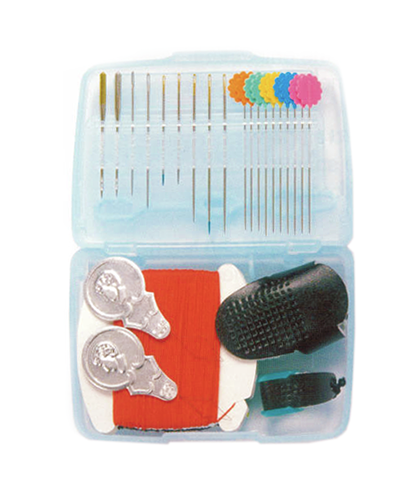 Beginning from 1970, Tulip has been supplying the needle set that is included in home economics sewing kits for 5th year elementary school students. The needles you first encountered in elementary school were Tulip needles!

During the early 1970s, we delivered 1.3 million of these needle sets annually, however the number of sets sold began to decline in the 1980s as people began having fewer children.

At present, we deliver 700,000 sets per year, and Tulip needle sets account for an approximately 70% share of the teaching needle sets in Japan.

Cellulose marking pins were developed for home economics instruction by the first president of Tulip in 1965.
The head was coated with cellulose, and letters could be printed on the reverse side. They were developed to allow students to write their names on the pins, so that if they were dropped it would be possible to determine who they belonged to.

These pins were created with the desire that students learn to take good care of even the smallest tools.

10. We want people to better understand the pleasure of hand-made crafts 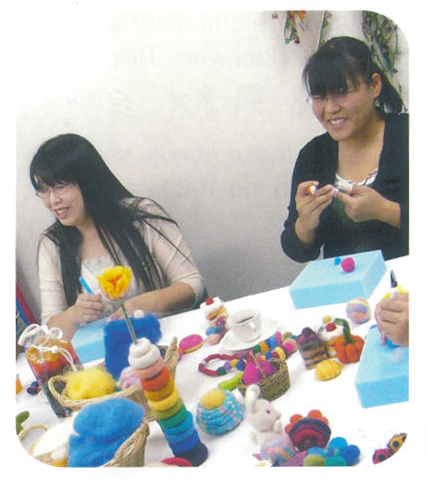 Tulip holds hand-made craft events to share the enjoyment of craft making and produce smiles and excitement in our customers.

If you work properly, creating a hand-made craft does not require all that much time.

However for us, the time spent absorbed in the work as we create a one-of-a-kind craft, is precious.

We hold demonstrations around Japan so that people can learn from a young age how to correctly and safely use the needles that are indispensable in our lives.

We are expanding these activities to children’s houses, retirement homes, stores, schools, companies, and rehabilitation centres. 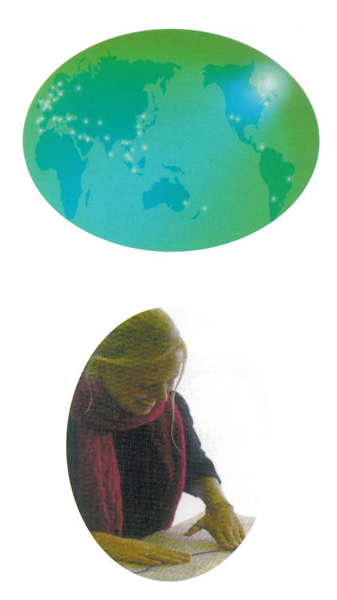 Tulip has put effort into exports for many years, and our traditional Japanese technologies have been used in many countries worldwide.
In the future, we hope to bring the traditional handcrafts from these countries to Japan, and the network which we have already constructed ‘gives us a great opportunity to do this.

Making use of this opportunity, we invited a pojagi instructor from Korea to give demonstrations, and we are now the only manufacturer of the special pojagi needles in Japan.

We also introduced felting from Holland, and offer colourful wool yarns that are only made in Europe, as well as products which can be enjoyed by younger persons in their busy modem lifestyles.
In order to introduce the Turkish craft “oya,” we are developing products together with a Japanese expert on Turkish traditional handcrafts, and are planning opportunities for as many people as possible to experience this craft for themselves.

This will certainly be something to look forward to.

The cookies defines under this category are absolutely essential for the website to function. Hence they are loaded by default irrespective of user consent. This is a necessary category.

Analytics cookies help us understand how our visitors interact with the website. It helps us understand the number of visitors, where the visitors are coming from, and the pages they navigate. The cookies collect this data and are reported anonymously.

These cookies are used to enhance the performance and functionality of our websites but are non-essential to their use. However, without these cookies, certain functionality(like videos) may become unavailable.

Save & Accept
Go to Top